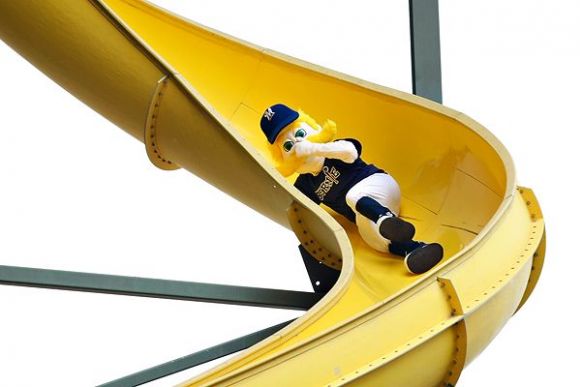 The NL Central's swing team is daring to dream.

Milwaukee believes it's thisclose to joining Chicago and St Louis in being considered a perennial contender.

They could well be, passing the Cardinals to finish second to the Cubs by only six games in 2017.

The task, then, is closing that gap.

The Brews had been rightly focusing on improving their pitching:

With this sorta ambition, GM David Stearns feels there's no reason Milwaukee wouldn't be in with a shot to acquire disgruntled Miami slugger Christian Yelich.

Oppo power is a cherished talent.

So is balls-out defensive intensity.

Yelich comes with a 2017 WAR of 3.9, so a similar performance would make up two-thirds of that gap with the Cubbies.

Miami does have a knack for uncovering prospects. Just wander to the back fields during spring training, and you'll see half of Latin America in Marlins uniforms. Clearly, Derek Jeter is counting on a handful of them rising quickly through the ranks.

What Yelich would have to buy into is Milwaukee being a team on the rise. Over the past five years, the they've have only been 6 wins per season better than the Marlins, 398 to 366.

But the Brews are rebuilding, and for what it's worth, his good buddy Marcel Ozuna's now a Cardinal. That'd be up to 18 meals together, if they're so inclined.

Dude, you're both into seven figures.

Yelich doesn't have a no-trade clause, so the decision's not entirely his.

For the sake of clubhouse tranquility, though, maybe it could be.