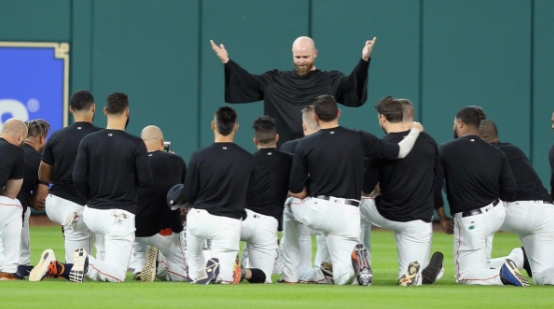 A baseball stadium is not the typical venue for a funeral.

However, some are referred to as cathedrals, so perhaps it's somehow appropriate.

Possibly with this in mind, the Houston Astros held a funeral service for the dearly departed glove of Carlos Beltran.

Sadly, the glove was no longer of any practical use for the full-time DH, but we understand it did pass away peacefully.

It appears the service was treated with the upmost respect.

This is good, because sometimes these affairs can get out of hand.

There was even a priest in attendance, or more accurately, a catcher masquerading as a priest.

Let's just all be thankful the glove wasn't possessed.

Reportedly, the Astros initially attempted to flush the glove down a Minute Maid Park toilet, but then decided to go in a different direction.

Perhaps the service was a bit premature, as the three-time Gold Glove winner was back in the outfield two days after the funeral.

No need to order that Rascal just yet, as the 40-year old can still move around a bit.