The Angels Will Be Feeling Dodger Blue 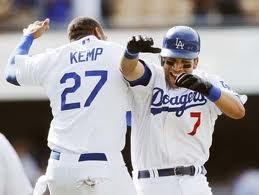 After getting treated to a four-game series and eventually a sweep of the miserably slumping Kansas City Royals, it was back to a dose of reality for the LA Angels of Anaheim Monday in their 8-7 loss to the Dodgers.

Blanton (1-7; 6.19) is coming off of his first win of the season Thursday over Kansas City. However, the Royals have dropped 9 of 10, and that may have been more about catching the right team at the right time than Blanton finding a groove. He wasn't bad in that game, lasting 6⅔ innings and allowing two runs, but we're not ready to say he's suddenly worth the $15million, two-year contract he signed in the off season. We'll wait on that, especially considering the interesting nuggets found by using our Bovada data tool on the Home page. There, you'll find that Angels pitchers are third-worst in the American league in hits allowed per game at 9.5, as well as walks per game at 3.7.

Those reasons are just part of the reason why I will be backing Ryu (5-2; 3.30 ERA) and the Dodgers tonight to make it two straight. Ryu has been much more consistent than Blanton so far, and throwing from the left side likely will work to his favor as the Angels are among the worst hitting teams in the majors against lefties, with a .236 team batting average. As good as Ryu has been overall this season, he's been even better at home in the friendly confines of Chavez Ravine where he's 3-1 with an ERA of 2.13 this season.

Neither team has a bullpen that is anything to write home about, and I will be squirming a little if Ryu leaves the game and it's still close. The odds are, though, Blanton will be the one who goes first. In two of his last three starts, he never made it out of the fifth inning (the one that he did was against Kansas City).

Bovada has the Dodgers tabbed as favorites at -133, and I was expecting something more lopsoded than that, based on the struggles of Blanton and the success of Ryu. I will be wearing Dodger blue tonight!