The AL West Is This Season's Stealth Division 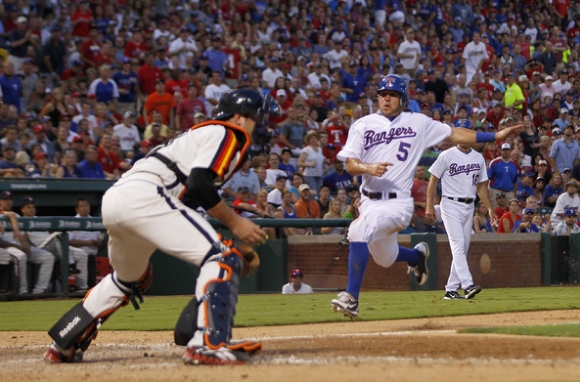 The team that seemed to focus on 2016 when it traded for Cole Hamels is in the thick of 2015 playoff contention.

As a matter of fact, the Texas Rangers are only four games behind the AL West-leading Houston Astros and one game out of a wild card slot as this week's play begins:

Now, if Hamels would only come through, 2016 just might come early.

Seems like the last time anyone was really paying attention to the AL West, Houston's feelgood story and decent divisional lead had most putting paid to the race there.

After all, the Angels were the underachieving soap opera nobody watches; Orange County doesn't give a damn about Los Angeles, and with the possible exception of East LA, vice versa when the Dodgers are contending. Billy Beane had already waved the white flag in Oakland during the off-season, and the fancied Mariners were already on suicide watch.

But here it is, the ides of Dog Days, and Texas is in with much more than a shout.

For a while, it looked like the highlight of their season was getting Josh Hamilton back while Arte Moreno paid for the privilege. But a healthy Prince Fielder has led an offense reminiscent of Ron Washington's Rangers, the defense has been decent, and the pitching is playoff capable. Especially if Hamels snaps out of it.

Houston did well to pick up homeboy Scott Kazmir and Carlos Gómez. The former looks like he did in his salad days, while the latter definitely brought his trademark ritual from Milwaukee:

The 'Stros righted their orbit after a pre-All-Star dip, but they most likely weren't concerned, knowing that at some point, three Angels would probably get injured within a week and mega-meddler Arte Moreno would then blame Josh Hamilton for creating a "culture of injury" and miss the playoffs because, well, that's just what they do in Anaheim these days.

Can a club that doesn't deserve Mike Trout and is benefitting by a rejuvenated Albert Pujols keep the AL West from being a Texas two-step? Actually, that's not a rhetorical question. The answer is of course, which summons a thought that the Halos don't deserve Mike Scoscia, either.

So while the baseball world remains infatuated with the AL East and NL East and remains amazed at the whopping dollars the Dodgers have thrown around to lead the NL West -- and Missouri obsesses about another I-70 World Series -- perhaps the real drama will unfold somewhere else.