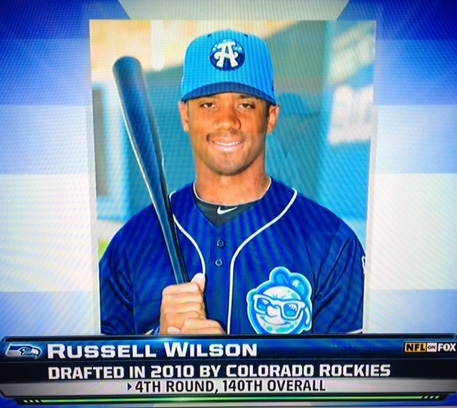 In a sense, baseball made Russell Wilson what he is today.

After all, if North Carolina State's football coaches hadn't told their scholarship quarterback that they'd drop him if he didn't drop baseball, he might not have wound up at Wisconsin.

Wilson was a two-sport athlete with the Wolfpack, but his coaches wanted him available for spring practice. Instead, he was busy playing second base and did well enough to be drafted by the Colorado Rockies. When he decided to report to their AA club in Ashville, he was released from his ride at NC State.

Wisconsin needed a quarterback, and didn't have any trouble with Wilson's dual dream. The rest is history. The Badgers made out like bandits, and Wilson made out even better. 2012 was quite a year.

Wilson is looking to be in line for a lucrative raise when his next contract negotiation rolls around, and now he might have another bargaining chip. The Texas Rangers took a flyer on him in today's Rule 5 Draft, where teams can lift minor leaguers from other organizations under certain terms.

After all, baseball is where the real money is.

For example, consider this:

Only nine players in NFL history have ever earned $100million contracts. The New York Yankees alone had more than that on their payroll last year.

And the baseball players won't be walking with limps or have nagging headaches when they retire to spend the rest of their lives enjoying the fruits of their labors.

Realistically, it would take something drastic for Wilson to change course. The last players to try this -- Bo Jackson and Deion Sanders -- weren't quarterbacks. The quarterbacks who tried baseball first, like Josh Booty, found that football wasn't as challenging as baseball, and that splitting time was only for the most elite of athletes.

Rangers GM Jon Daniels has emphasized that Wilson would serve as an excellent example of work ethic and commitment to his young charges in spring training. If so, it's an interesting take. The Rangers could use something -- anything -- to get that extra mile crossed and earn a World Series championship.

If it works, and Seattle also goes on to win the Super Bowl this season, Wilson could be in line to become immortalized to sports trivia buffs everywhere as the only person on Earth to win a baseball and football championship ring in the same season. Stranger things have happened.

Like a rookie quarterback leading an NFL team to within one win of the title game.