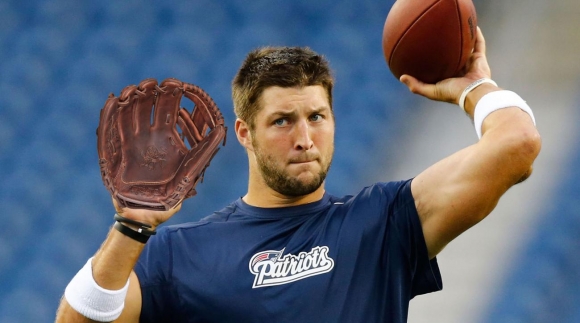 Baseball's got a term for players who do their best work in pre-game warm-ups:

If Tim Tebow's baseball workout in front of 27 MLB teams and a host of media confirmed anything, it's that he's one of them.

It's an easy game when no one's trying to get you out.

However, try the same thing in a simulated game when a one-time MLB pitcher like David Aardsma starts mixing in garden variety dark stuff, like a slider that isn't good enough to keep him on a roster anymore.

It's a different story.

Most ballplayers will say they don't really start learning the game until they get to the AA level.

That's when pitchers start refining their craft instead of trying to fire every delivery through a brick wall. So that's when hitters start seeing a regular fare of soft stuff that can well and truly disrupt timing.

Those may get on a QB quickly, but they're not at 80mph-100mph where a batter needs to adjust for the difference in speed and then do something useful.

Tebow's 29, and we may have already seen the best of him.

Still, opinions are as varied as the scouts and snarksters who took it all in. Well, the fact that he's American didn't hurt him in the eyes of Venezuela's Águilas del Zulia, who've already offered him a contract.

A season of winter ball would do the dude good, and it was damn considerate of neighboring Colombia to call off its civil war to make the region safer for him.

Tebow's all about miracles.

Maybe the Atlanta Braves will sign him for a PR boost they surely need. But as to Tebow ever making it to the majors, that'd be a miracle in itself.