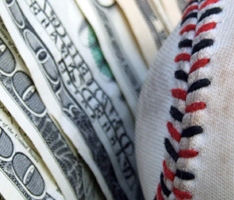 Japan's Rakuten Golden Eagles decided to stay within the spirit of an agreement.

They also figured the wise thing to do was to only roster players who wanted to be Rakuten Golden Eagles.

Despite a loophole in the agreement as enticing as a hanging curve, the Golden Eagles granted their staff ace, righty Masahiro Tanaka, his wish to pursue an MLB career immediately.

Rakuten was prepared to double, and possibly triple, Tanaka's $4million salary if he'd stay at least another year in the Japan League. In reality, though, the 25-year-old was ready for another challenge.

While impressed with his 96mph heater, most scouts feel it will be his command of secondary pitches that will land him a healthy contract in the majors. The data chomping and mechanics comparisons have been well underway for some time but have now shifted into high gear.

While the $20million posting ceiling is intended to make bidding for Japanese players accessible to more MLB teams, the hard fact is it's just a premium to be tacked on to what will still be an astronomical contract for players with Tanaka's hype. Clearly, the number of MLB teams approaching him will reach double figures.

However, it's odds-on his contract is going to reach nine-figures. That's a realm inhabited only by clubs enriched by huge cable deals. They're the only ones who can afford Tanaka.

More importantly, if he doesn't pan out, they're the only ones who can afford to write him off.