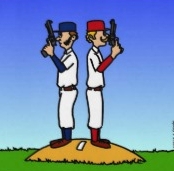 Sunday's finale of the Nationals v Braves series shapes up to be a good old-fashioned pitchers' duel in the nation's capital.

Lefties Paul Maholm (2-0 0.00) and Gio Gonzalez (1-0 0.82) go at it for Atlanta and Washington respectively, with the 10-1 Braves looking for their first sweep in Washington in four seasons.

That won't be easy, as Gonzalez is picking up where he left off in his stellar 2012 campaign. In his most recent outing, Gonzalez collected a season-high seven strikeouts while surrendering just a run in the Nationals 8-7 win over the Chicago White Sox on Tue 9 April.

As impressive as Gonzalez has been, his counterpart from Atlanta has even been better. Maholm's numbers listed in our Bovada data tool on the Home page show just how effective Paul Maholm has been for Atlanta.

In 12⅔ innings, he has walked only four while striking out 13. But it's that scoreless 12⅔ that is the big attention-grabber to me.

Atlanta pulled off a 3-1 victory in their Saturday match-up, and with these two pitchers off to red-hot starts, I look for a similar, low-scoring game. To further that thought, backing Maholm out of the bullpen is a Braves relief staff that has combined for a Major League best 1.35 ERA.  Maholm has had struggles against Washington in the past (1-6, 5.52 ERA lifetime), but he seems to have shifted his game into a different gear this season. Couple that with Gonzalez in the other dugout, and the runs should be very tough to come by for both teams.

Bovada has the run total at 7 as of around 12.00pm edt, and it seems a little high for my liking. I'm going below that.

My pick:  Braves v Nationals UNDER 7