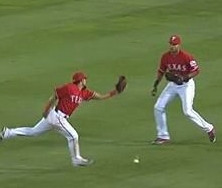 Boston's David Ortiz almost set in motion the source of seamhead disputes for years to come.

And in his final at-bat, Big Papi turned it into an academic point.

It was the seventh inning at the Ballpark in Arlington last night. The Texas Rangers had the game well in hand with an 8-0 lead, but the drama was on the mound. Yu Darvish was in pursuit of a perfect game. Again.

With two gone in the frame, Ortiz stepped to he plate, and this happened, complete with reactions from former players Harold Reynolds and Mitch Williams, along with moderator Greg Amsinger:

Ortiz shot a clean single through the shift with two out in the ninth. Otherwise, this would have amplified the polar dichotomy between Reynolds and Williams, not to mention the game's legion of pedantic fans.

The heart of the dispute is MLB's Rule 10.12(a)(1), the accompanying comment -- yes, the thickest of all sport's rule books has official comments -- includes this phrase:

This would seem to support the Wild Thing's contention, but historically, scoring decisions have overwhelmingly been consistent with what Reynolds is arguing. It may or may not be a coincidence that their perspectives coincide with their playing positions; Reynolds was a second baseman, and Williams was a pitcher.

Frankly, virtually all of baseball would agree with Reynolds, too.

Momentous no-hitters have been awarded and denied by questionable umpiring decisions, the latter of which was the call in Detroit that may have been the single most influential factor in baseball deciding to expand its replay-review rules:

This wasn't Darvish's most frustrating brush with perfection, though. He had total command of the lowly Astros for 8⅔ innings on Opening Day in Houston last year, when this happened:

At least, in that one, his fate was in his own hands, or in this case, through his own legs.

And it was a hit.