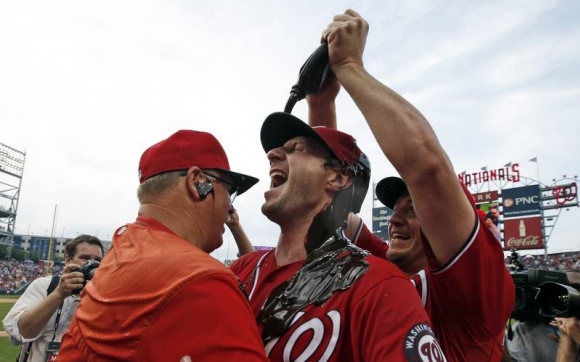 Max Scherzer was an absolute stud on Saturday.

But first, time to take a trip down memory lane.

Back in 1968, future Los Angeles Dodgers Hall of Famer Don Drysdale was working on his fifth shutout in what would become -- at the time -- a record scoreless innings streak. He was facing the rival San Francisco Giants, and the bases were loaded with catcher Dick Dietz at the plate.

Drysdale, no shrinking violet, came inside to the just-as-hardened Dietz, who saw the pitch was going to hit him and didn't move. It would force in a run and deny Drysdale the record. But umpire Harry Wendelstedt enforced an often-ignored rule and said Dietz didn't try to avoid the pitch. He stayed at the plate, furious, and would up hitting a shallow fly out. The Dodger ace went on to claim the record.

Scherzer could've used a hard-ass like Wendelstedt against the Pirates.

The Nationals ace struck out 10 of them on the way to his first career no-hitter:

In most cases, a no-hitter would be cause for a celebration, except by the team on the opposing side. However, this no-hitter has become the subject of controversy.

Scherzer was wheeling and dealing his way to a perfect game until Jose Tabata stepped up to the plate. The Nats' righty was got within one strike of MLB's 24th perfect game, when Tabata leaned into an inside pitch:

Being the ace that he is, Scherzer salvaged the no-no by getting Josh Harrison to fly out. But while the Nationals were celebrating their pitcher’s stellar start, fans and media alike were wondering about what could have been.

Tabata adamantly denied leaning into the pitch, but his words fell on deaf ears. It's hard to blame Tabata for leaning into the pitch. Was his getting on base going to help get his team a win? Well, after trailing 6-0 with two out in the ninth against a hot hand, it woulda been a comeback for the ages.

But who wants to be remembered as being the last out of a perfect game?

Like Dietz 47 years ago, Tabata isn’t the one who should be called into question here. The umpires should've been as alert as Wendelstedt and called the pitch that hit him a ball for  failing to make an attempt to move out of the way.

Scherzer would then have had a shot at the perfect game that he deserves. Afterward, he did take the high road and move on.

Thus, history was denied by lazy umpiring. It happens all to frequently. Just ask Armando Galarraga.