Struggling Southpaws vs Sluggers on the South Side 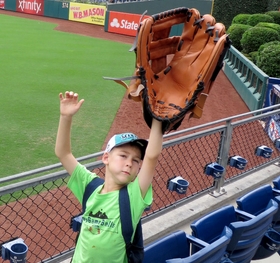 It's a battle of lefties today in the Windy City, where Toronto's Blue Jays continue their stay in the South Side against the Chicago White Sox.

It's also a bit of a homecoming for Toronto starter Mark Buehrle (11-8, 3.31), who spent the first 12 seasons of his major league career in a ChiSox uniform. But don't expect home town hitters to roll out the red carpet for Buehrle, who lately could use every bit of help he can get.

But he'll always have this:

After a blistering start to the season, Buehrle has gone 1-2 with an ERA over more than 7.00 since the All-Star break. His last two outings have been a major reason for the lofty earnie, having allowed six of them in 7⅓ innings. During that same span, he's surrendered 19 hits ... nearly 3 per inning.

Now, before you get the vibes that I'm leading toward a White Sox upset, Buehrle's buddy and former teammate John Danks (9-8, 4.96), hasn't been much better. In fact, to be frank, Danks has been worse since the break, like 1-2 with a whopping 9.33 ERA worse.

Put the poor recent pitching against bats held by the likes of Bautista and Encarnacion of Toronto and Abreu of Chicago, and it's hard to imagine this one staying under Bovada's total of 9 runs.

Now, if the pitchers' performances in the last month don't sway you, how about some numbers from the entire season?

Let's look at the Bovada data tool on our Home page. And remember the pitchers' recent performances? Maybe one of these two teams will be held below four, but the chances of both? I'm willing to roll the dice and betting not.

I haven't even touched on the fact that these two teams combined for 16 runs last night, possibly setting the tone for more fireworks today. But in reality, if yesterday's score was 1-0, it wouldn't matter anyway. These pitchers have given us nothing lately to make me believe this one stays under 9, and those unloading on the over will wind up very happy at the end of the night.