'Stros Closer Gets a Win on the Field, Still Working on It in the Clubhouse

Published on 7-Aug-2018 by Alan Adamsson 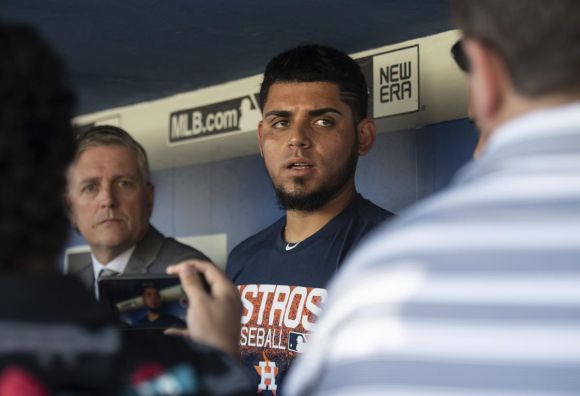 What with the Oakland Athletics now in hot pursuit, it's not like the defending World Series champion Houston Astros need any distractions right now.

But they've got one, and it's awkward.

With Ken Giles deteriorating from ex-closer to ex-'Stro, GM Jeff Luhnow needed a quality fix and made a baseball move.

If only that was the whole story.

The announcement that their team just picked up Roberto Osuna from Toronto was met by the players with a combination of stunned silence and disbelief.

Houston's overtly made it refreshingly clear that they're a zero-tolerance team regarding domestic abuse, and their new teammate just got off a 75-game suspension for that very thing.

Only a few months earlier, the Astros released a minor-leaguer for boxing around his ex-girlfriend, and Justin Verlander led the way in saying good riddance:

🖕🏻 you man. I hope the rest of your life without baseball is horrible. You deserve all that is coming your way! https://t.co/e8nJ8urUAJ

Luhnow tried to turn the page by saying Osuna's remorseful for the incident, but -- sincere or not -- it's not that simple.

The closer can't say that right now for legal reasons.

Osuna addressed his new teammates in a closed-door session, but based on the clipped, low-key comments they reluctantly offered afterward, dude's still got a bitta work to do.

Doing his job on the mound was a good place to start, and dude finally got there in the 8th inning against the Giants last night:

Such is the folly of a pitcher's won-lost record.

For once this season, at least, Osuna was in the right place at the right time.

No one's perfect in this game, and for all his planning to move the 'Stros from outhouse to penthouse, it's not like he hasn't made a glaring mistake or two along the way.

Osuna's entitled to his day in court. Until then, it's clear wary glances will be cast his way.

In the dog days of a typically long season, it's not the sorta mood a World Series contender needs.