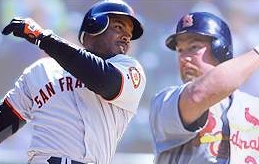 As one of my favorite old reggae songs goes, "the system is a fraud." After his public downfall for trying to cheat the system, just like poor old Pete Rose and then snake bit Roger Clemens, outcast multimillionaire Barry Bonds would seem to have paid his dues already.
The Dodgers, who are hot on the tails of our heroes in Orange and Black out of the gate, have their steroid refugee in Mark McGwire, who -- during his heyday in the 1980s and 1990s -- was the scourge of opposing pitchers everywhere.
McGwire's hitting know-how seems to be working for LA. There doesn't appear to be anything wrong with the Dodger hitters' confidence, like there is with the Giants lately. What the Giants see in their current hitting coach is beyond me.
Why can't they bring Barry Bonds back? The Giants' offense out of spring training -- after hitting instruction from Bonds -- is testimony to the most powerful coaching of all. It's the sort of tutelage that only a former bona fidé slugger like Bonds can bring, from one who has actually been there and done that.
DAILY UPDATE