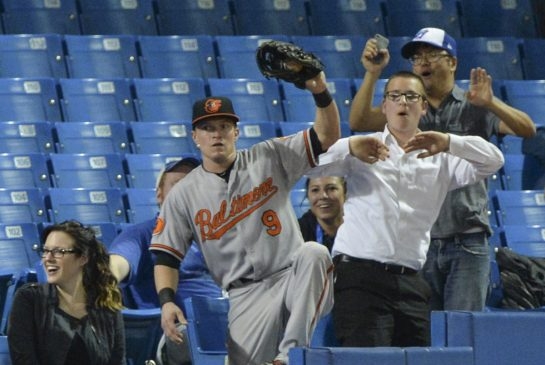 The Toronto Blue Jays may be giving the New York Yankees a run for their money for fans when it comes to boors.

First, they accuse Clay Buchholz of cheating because it was just too inconceivable that their offense isn’t as good as it appears on paper. Now, they have now resorted to throwing beer at opposing players.

I get frustrated as the next guy. Being a Red Sox fan, it’s pretty easy to get upset early in the game, especially in recent years. However, the actions of the Toronto fans so far this year have been nothing short of downright nasty. From booing John Farrell to personally attacking opposing players, you start to wonder if things can get any uglier.

Baltimore Orioles outfielder Nate McLouth dove into the stands to catch a foul ball in Rogers Center. After catapulting into the fans, he came up no worse for wear, holding the ball for the umpires to see. Things took a quick sour turn, though, when he got back on the field, as a fan threw a full beer down at him.

"It just kind of startled me for a second," McLouth said. "I'm not really sure how close it landed. That's just one person doing something he shouldn't do."

Getting frustrated is one thing -- and how could you not after seeing a catch like that? -- but to throw a beer at a player is entirely another. The fan was caught and escorted out of the park. Fortunately, he is just one of a minority of the bone-headed fans who appear in every ballpark across the country. Still, the Blue Jays’ fans have been a bit much all season, with this being the latest misstep.

Orioles manager Buck Showalter took the high road, choosing to keep the peace rather than start another fight.

“It’s unfortunate,” Showalter said. “The umpires and the security do what they do. Unfortunately, it happens in ballparks now and then. It’s one person, and you don’t group the whole [crowd]. They got rid of him … They did what they were supposed to do, and we moved on.”

The Yankees fans are still right up there for least classiest for many reasons, but if the Blue Jays fans keep it up, then they will soon be mentioned in the same breath.

They aleady are in mine.