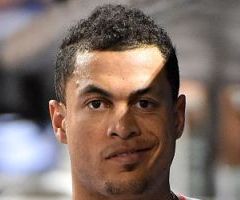 There are 749 active players on MLB rosters right now, and none of them are named Giancarlo Stanton.

That's good work if you can get it, and hella better than what they were earning before they got there.

Reaching for the brass ring then, comes with an enormous amount of risk.

But every one of them will say the chase is worth it if they can just have that one day.

It's ultrabetter if you can upstage one of the game's biggest names in the process.

That's where Matt Davidson of the Chicago White Sox is right now. Dude's living the dream for a team still on the bummer end of an Astros-type rebuild, so his moments may truly be ones to cherish.

The ChiSox clobbered Kansas City's alleged pitching to the tune of a 14-7 triumph, getting a leg up on who's gonna avoid the AL Central cellar this season.

For the record, anyone who had the Marlins refugee going deep in his first AB of the season is now free to collect whatever he won.

If anyone had the Colossus twice on Opening Day, Edgar Cayce wants to have a word.

Davidson even scooped Tampa Bay's Eduardo Nuñez  and his freaky 360:

Because baseball's the kinda sport where crazy coincidences and endless stats live, that's the second time dude's done this against the Rays.

But there's nothing crazy about the Davidson family relating how -- for generations to come -- one of their own took command of an Opening Day.

May he generate more headlines in his baseball future, but at least dude knows he's got one in the bag.