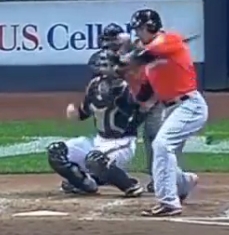 The heart and soul of Miami's power game zigged when a fastball zagged this evening in Milwaukee.

Giancarlo Stanton, having the sort of season that's made him a favorite for National League MVP, totally misread a Mike Fiers delivery that ran up and in. He took it square on the left cheekbone:

Given where Stanton got drilled, is the best that organist could do was play Spanish eyes?

Incredibly, Stanton's swing was so forceful that he couldn't check it. He went to the hospital on strike two.

That, however, wasn't what got the Marlins up in arms. Fiers, the Brewers starter on the night, obviously had a game plan to jam Miami batters and/or move them off the plate. If this hadn't been evident to the visitors by the fifth inning, it was crystal clear in the fifth inning.

The second batter was Reed Johnson, sent to the plate to complete Stanton's at-bat. He couldn't check his swing, either, and in the process, got drilled on the hand.

Johnson didn't realize umpire Jeff Kellogg ruled his bat crossed the plate and thus had to be summoned back from his jog to first. He was dumbfounded -- it was the correct call, though -- and on-deck batter Casey McGeehee was outraged, letting any and all know it. The former Brewer's volume-11 comments were most likely directed at the call, but Milwaukee's bench took umbrage. They raced plateward as one, with the exception of Fiers, who was restrained and nudged toward the Brews' dugout by one of the coaches.

Nothing escalted beyond that, but McGeehee and Fish skipper Mike Redmond were banished to the showers for their show of emotions.

The two-batter, two-drilled strikeout might have been a first in baseball's 168 documented years.

Fiers was too upset to continue, in the opinion of manager Ron Roenicke. His day was thus done, but he'd logged enough innings and gotten sufficient support to be the pitcher of record in Milwaukee's desperately-needed 4-0 victory.

One other ejection occured. Miami reliever Anthony DeSclafani nailed Carlos Gómez on a nod-and-a-wink fastball that 'got away' from him. Fortunately, the usually short-fused Brewer slugger with injury issues of his own figured enough frustration had been served on the Marlins and trotted to first without incident.

Take a close look at the direction of the ball after it struck him:

Conventional wisdom and modern physics are in accord that the less distance a ball lands after impact, the more damage was done during impact. If Stanton had any luck at all here, it was that he didn't lose an eye or get his nose driven back up into his brain.

Odds are, though, the term lucky is probably the furthest thought from his mind.