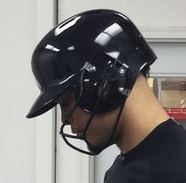 When Charlie O'Brien signed a free-agent deal with the Toronto Blue Jays, he changed baseball for the better.

Not for his catching abilities, but by his intrigue with the helmets hockey goalies wore.

With players and equipment manufacturers so accessible, O'Brien took it upon himself to sponsor a prototype to replace his own mask. He ultimately got MLB approval to use it in a game, and at least one tool of ignorance got suddenly smarter.

On occasion, when batters take a pitch to the jaw, they return to action with an embellished helmet of their own. Jason Heyward, for one, has decided to make it standard issue:

Now, Giancarlo Stanton -- back from a vicious facial injury -- has decided to do Heyward and others one tech step better by doing what O'Brien did: borrow from another sport. Wisely, he chose cricket:

The half-grill will help. But as cricketers will attest, it's still not the final word in safety.

Stanton got smashed by an 88mph pitch. Elite cricket bowlers can match pitchers with 100mph heat. Australia's Brett Lee -- recently retired -- is one of them. Opposing batsmen have still emerged bloodied and sometimes concussed.

Of course, by virtue of the game, cricketers have a completely different approach than baseball batters; for instance, the batsman here merely continued his stand. But the point remains: there's only so much equipment can do to protect.

However, Stanton's helmet is a step forward, and a stylish one at that. Look good, play well may have some bearing here. It's just as likely, though, that when he gets into game conditions, that grill will reassure his psyche as much as guard his being.