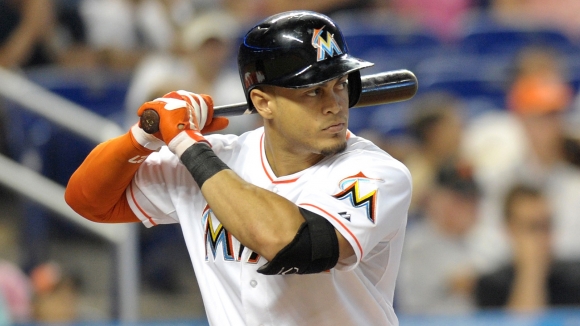 Giancarlo Stanton is a man of superlatives.

Arguably, he's the most ripped dude in the game.

And right now, he's like most players in the MLB right now.

Stanton's available for a waiver trade if anyone wants to pay the price. In theory, that could include NASA.

To review the rule, MLB allows teams to make virtually any trade -- there are exceptions -- prior to 1 August of each season. After that time, a player must clear waivers before a deal can be made.

Furthermore, a player must be on a team's roster by 31 August to be eligible for the post-season.

It should be noted that teams put virtually everybody on waivers this time of year, just to see what the market looks like. If a team makes a claim on Stanton or anyone else, that player gets pulled back and trade talks begin. As well, other teams may make a claim to block a rival contender from making a deal for that player.

Four teams have reportedly inquired about swinging a deal for Stanton. No word yet on what Miami's proposed new owners might think of it.

Officially, of course, they don't have a say, but being real, they do have $1.2billion on the table.

Could you imagine the New Colussus in a park like Fenway, with its close-but-tall Monster in left and short porch in right? Stanton could check swing balls outta there.

Dude's so hot right now, he could be singulary responsible for global warming.

The only player with a better ratio is Rangers 3B Joey Gallo, who has the edge by 0.01 at-bat. However, the 6-5 Nevadan is a special case, as about half of his 70 hits to date have been dingers.

But back to the artist formerly known as Mike Stanton:

Stanton's chasing Roger Maris, who hit a PED-free 61 homers back in 1961. It'll take a strong finish, though.

Jacking 18 bombs in less than a month-and-a-half of baseball is no mean feat, even for the New Colussus.

Plus, Stanton's never been the healthiest player in the game

If he ever does log a year relatively free of down time, dude's a legit threat to clean up the pending single-season mark.

Regardless of your thoughts on Barry Bonds and what he may or may not have used, dude still hit 73.

The question now is whether every round-tripper in August will help him get off another garbage Marlins team.