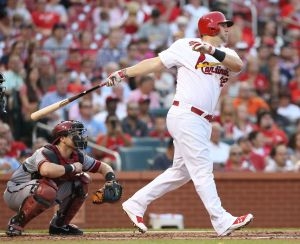 The MLB season is only at the quarter pole, but one would think a contender's roster would be settled by now.

It's just not working out that way for almost everybody's favorite in the NL Central.

First of all, they're not it first. Yet.

Take last night against Arizona. Starter Michael Wacha was cruising along with a two-hit shutout after six innings. The Diamondback batters couldn't touch him. They tried. Literally. Unfortunately for the 22-year-old phenom, though, one of his own could:

The diagnosis was a contusion on his throwing elbow, which shouldn't put him on the shelf for very long, if at all. And if it does, the Cardinals will do what they seemingly always do these days, which is reach into their farm system and roll out another fireballing phenom.

That's worked for pitchers, anyway. Hitters are another issue altogether.

The vaunted Cardinal attack has lost most of its vaunt so far this season. The power game is sputtering, and the table setters aren't. They're winning with the age-old success formula of pitching and occasional defense, as last night's game indicated.

However, that's not what they expected. With the St Louis lineup not producing, what happened to the 'deepest farm system' in baseball?

The local press is clamoring for moves to be made. The Cardinals do so, but something happens between its AAA affiliate in Memphis and the big club. Promising outfielder Randal Grichuk -- obtained in the David Freese-Fernando Salas trade with the Angels along with Peter Bourjos -- rakes with the Redbirds but reeks with the Cardinals. So does 2B Kolten Wong and his replacement, Greg Garcia. And so on.

Now, their most prized position player, Oscar Tavares, appears to be on his way to The Show when St Louis can add a DH for its upcoming interleague games. Injured for most of last season, the 22-year-old's stats at AAA are .313/.361/.512 with six dingers. But if he comes, who goes? The outfield has Matt Holliday, Allen Craig, John Jay, and Bourjos. Matt Adams and Craig can play first. All have MLB cred, but only Holliday is reaching base regularly.

It's a classic AAAA scenario.

The Pacific Coast League is a hitter's haven, but in years past, call-ups like Craig and Adams just kept on producing when they reached St Louis. Not so in 2014.

Full marks to the Brewers for their run at the top, but they've still got to show they have the depth to do what they've done only once. But if the NL Central crown is to remain in St Louis and the hitters don't warm with the Midwest weather, an AAAA attack is going to keep the division race a four-team affair.