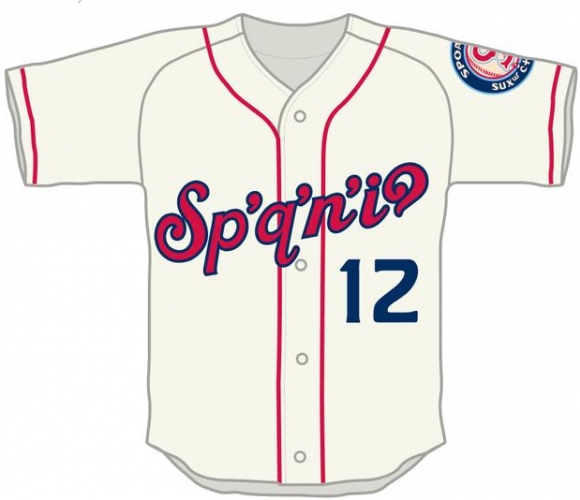 Come to think of it, the first English-speaking settlers were so rotten at phonics, why not revert to the way the original locals wrote it?

Spokane, Washington is best known among sports fans as being the home of the Gonzaga Bulldogs. Baseball trivia fans would know this mid-market city to defy the odds and be the home of two major league managers.

And now, Spokane is about to host the first professional baseball team to feature its name spelled in the language of its first inhabitants.

The Native American tribe there has always been known as the Children of the Sun. In their Salish language, that term is pronounced spo-KAN. Why the first Anglophones there put an 'e' at the end -- inaccurately making it spo-CANE -- is anyone's guess; it doesn't say much for the quality of one-room schoolhouses and spelling proficiency from back in the day.

Pro baseball teams in Spokane have been known as the Indians throughout their various existences. Now in low-A, the local team is owned by the Brett brothers -- Hall of Famer George, Bobby, and John; now absent the late Kenny -- as part of a minor-league sports empire that has done very well by the city and does very well for the city. And they never miss an opportunity to show it:

So, viewing the mascot controversies in other parts of North America, the Bretts decided to do what the likes of Florida State and the University of Utah did, and that's get the endorsement of their baseball team's Native American namesakes. Now, they've taken it a step further with their incorporation of the Salish language into the uniform.

Recognition of the Salish has been quite progressive in the USA's Pacific Northwest and the Lower Mainland of Canada. Geographical place-names have been officially changed to reflect the scope of its culture. After virtually disappearing into the annals of history, the Salish language is experiencing a strong revival, and the Spokane community is in the forefront.

The jersey is certain to become a hot seller, for uniqueness as much as historical value. And at long last, the term Children of the Sun will actually be spelled correctly.