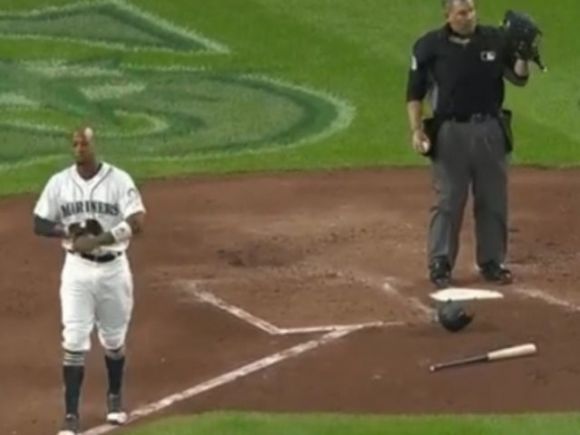 If you really pay attention to the game every day, you'll likely see something you've never seen before.

You know, like a ballplayer almost blinding an umpire with his batting gloves.

In the second inning of a game against the loaded New York Yankees, Seattle Mariners outfielder Keon Broxton was at the plate trying desperately to improve on his sub-.200 batting average when things somehow got worse.

Predictably, Broxton got caught looking, which sent him into a bit of a tizzy.

This was a particularly acute case of the Mondays, as the 29-year-old journeyman started flinging equipment all over the yard.

Here are some moving pictures and commentary, courtesy of our good friends at Jomboy Media:

That's a remarkable piece of video.

While the called third strike was horrifically bad, the ejection was certainly justified.

Keon Broxton has been tossed by home plate umpire Manny Gonzalez for arguing this called strike 3 which was obviously not a strike. pic.twitter.com/vXZPtxsHeW

Broxton should probably win some sort of award for that spectacular no-look glove toss though, but instead he'll be receiving the lovely parting gift of a two-game suspension.

This calls to mind a much nastier incident in the NFL, but with the roles reversed:

Meanwhile, if Broxton wants to challenge an umpire to a duel, there are much better ways to go about it.