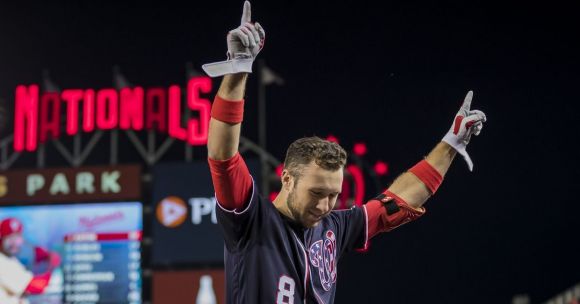 While the offspring of Vlad the Impaler was getting most of the attention Friday night in Canada, another dude was making a much quieter MLB debut in DC.

That would be the top prospect in the Nationals system who goes by the name of Carter Kieboom.

Power hitting middle infielders are always loads of fun, so many fans have been salivating over the 21-year old's arrival.

It also bears mentioning that his name is extremely pun-friendly, which is a very good thing as well.

In the eighth inning of said debut, with his Nats down by one run, the kid pulled out his boom stick with the intention of using it:

That is a genuinely cool moment.

And as if the situation and result weren't perfect enough, the reaction of his parents really makes it hum.

Oh, and the reluctant curtain call, too:

Again, had to do it.

You may be wondering what Kieboom will be doing with that super-special baseball.

21-year old Nats shortstop Carter Kieboom on what he'll do with the home run ball from his big-league debut: "It's gonna go to my parents' house. That way I don't lose it."

It's also more tactful than letting big brother Spencer look after it, since Washington shipped him out to AA Harrisburg last month.

And we're not going to let the fact that our boy struck out with the bases loaded with two outs in the bottom of the ninth after the Padres had retaken the lead spoil our fun.

While a homer in your MLB debut is quite an accomplishment, this put us in the mood for some first MLB at-bat homers.

As luck would have it, we just happen to have a compilation lying around:

That hit the spot.