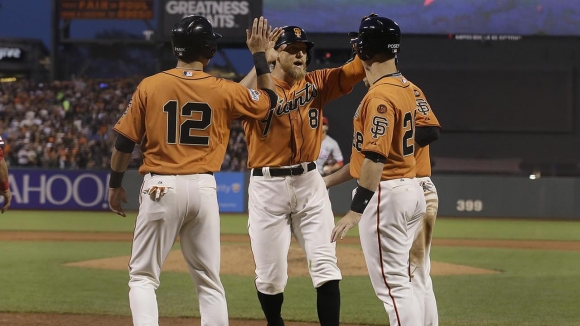 As a reason for their most recent decline in the season's first half, the San Francisco Giants can point to the time-honored specter of injuries to key players.

And there were many, including Hunter Pence, Matt Cain, Nori Aoki, and Jake Peavy.

With most of them on the mend, however, Giants fans have cause to be optimistic for an improved second-half performance.

The defending World Series champions, were reeling from, ahem, a giant slump that hit eight losses in nine games before the Phillies showed up on their schedule in the nick of time.

During their skid, the Orange & Black found one ray of hope in Matt Cain, who notched their sole win by shutting out the New York Mets. Perhaps he's finally back from the baseball undead.

That might be said of Jake Peavy, too. Although losing his first two outings after also returning from the DL, dude pitched very well and only lost due to poor run support.

One can only hope that the squad is making the best of their mid-summer break.

Of course, Padres and Diamondbacks fans -- with their clubs given new life by the World Champs' precipitous fall from their comfy second place spot atop the NL West -- probably feel that way also.