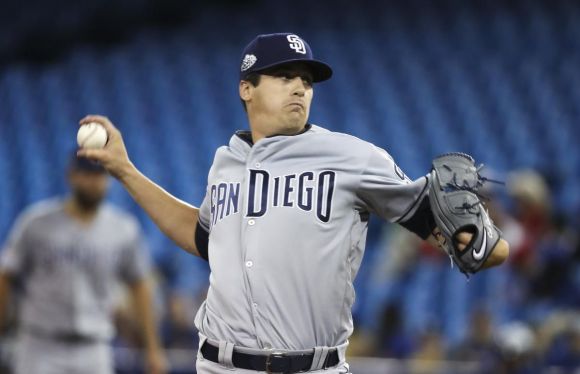 In the 2019 version of MLB, pitching is extremely difficult.

Baseballs are being launched with frightening regularity and distance, so any modicum of pitching success should be applauded.

But even with these caveats, the last three starts for Cal Quantrill have been putrid.

Well, this model of consistency has allowed exactly eight earned runs in each of his last three starts.

The first two were against the Dodgers and D-Backs.

Last night, it was the Cubs, turn to beat this dude senseless.

That really didn't go well at all.

Before this three-start gauntlet of despair, Quantrill had a perfectly respectable 3.32 ERA.

Cal Quantrill has allowed 8 earned runs in each of his last three starts, which must be some kind of record and also sucks some serious ass for my fantasy team.

Or anywhere else, really:

Cal Quantrill is the first pitcher to allow 8 runs in 3 consecutive starts since Albie Lopez in 2001. He's the first Padre since Andy Benes in 1993.

Cal Quantrill has allowed eight runs in each of his last three starts, and on Sunday he gets to pitch in Colorado against the Rockies. Calling the no-hitter right now.

At least that last one is guardedly optimistic.