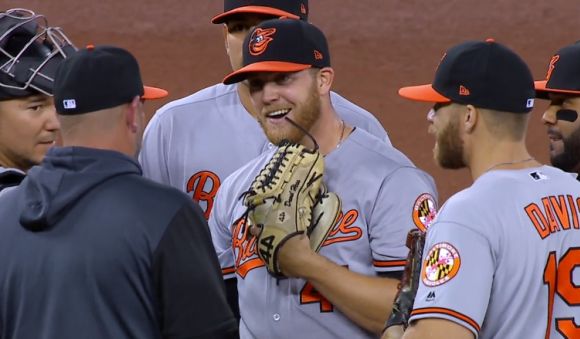 We typically see a couple of no-hitters every season in MLB, but this frequency doesn't make the event any less dramatic.

The 2019 season is only a week old, and a starter has already flirted with immortality.

However, dude's manager decided to do an AAF and pull the plug before he could finish, breaking the hearts and spirit of everyone in attendance.

A Baltimore Orioles pitcher by the name of David Hess tossed 6⅓ innings of gorgeous no-hit ball against the Blue Jays in Toronto, only to have manager Brandon Hyde walk out to the mound and viciously snatch the ball away from his trembling right hand.

This was definitely a very Chet thing to do, and it sucks ass.

Hess was at a meager 82 pitches when his faith in humanity was forever crippled by the evil Hyde.

Dude had been absolutely magnificent all night and was only eight outs away from history when this happened:

.@hess_express28 was absolutely STUNNED when Brandon Hyde pulled him from the game with a no-hitter in tact. 😱#ChangeUp pic.twitter.com/nXtQNl86zC

Hess was so completely shocked in the moment that he appeared to start laughing, probably a maniacal, unhinged sort of laugh.

He may have lost his shit completely if the Orioles bullpen had blown the game, something they came perilously close to doing.

Here's the 25-year old talking through the pain:

He's being a brave soldier and saying all the right things, but his inner monologue is probably a very different story.

As far as the first year manager goes, let's hear what his four whole games of experience has taught him:

Obviously, the fact that Hess pitched in relief on Opening Day changes the equation, but the skip still broke a good man simply because he could.