Some Kid Decided to Kick Dee Gordon in the Leg 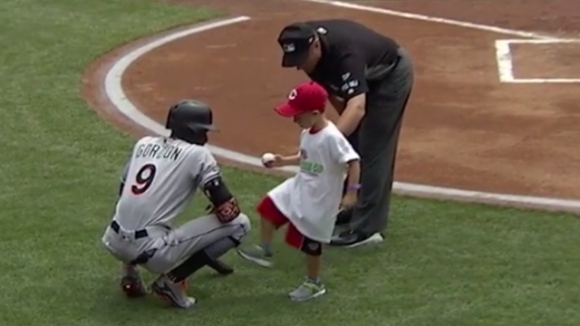 Perhaps the MLBPA should take a long look at player safety.

Miami Marlins infielder Dee Gordon was minding his own business on the field recently when he was attacked by a young Reds fan.

In addition to being granted access to the field by security, the rogue kid was also counseled by an umpire, who instructed the youngster to go after Gordon.

That grisly footage is difficult to watch.

Apparently, it's now okay for fans of the home team to come on the field during a game and attack opposing players.

Also, first base umpire Bruce Dreckman seems to have had an agenda, wanting to see Gordon removed from the game.

He clearly had no moral objections to using an impressionable youngster to carry out his plan, either, although the young Reds fan may have been looking to give his team an edge, something they desperately need.

Whatever the case, this is a real black eye for the sport.

The kid certainly knew what he was doing, aiming right for the leg in an attempt to take out Gordon's moneymakers.

However, this nefarious plot against the speedster was ultimately foiled, as Gordon promptly led off the game with a single and then stole second.

As a Reds fan, the kid should probably get used to a life filled with disappointment, anyway.