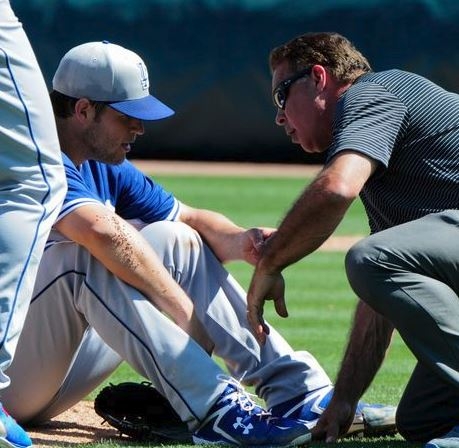 But Giancarlo Stanton's studly new batting helmet is another story.

However, baseball's rules don't allow for that yet, and probably never will.

The Dodger ace got a facial from Oakland's Andy Parrino in a Cactus League game today, when a broken-bat liner sailed straight back up the middle. Kershaw had time to flinch, but that was about it:

Full marks for staying in the game, too. The Los Angeles Kings would be proud.

Kershaw might even get a nod of sympathy from Chicago Blackhawks defenseman Duncan Keith, who stopped a slapshot with his fact back in Game 7 of the 2010 Western Conference finals. Keith simply picked up his chicklets and took them to the bench. He stayed in the game, too, and ultimately hoisted the Stanley Cup.