So Much for Marcell Ozuna's Gold Glove Chances 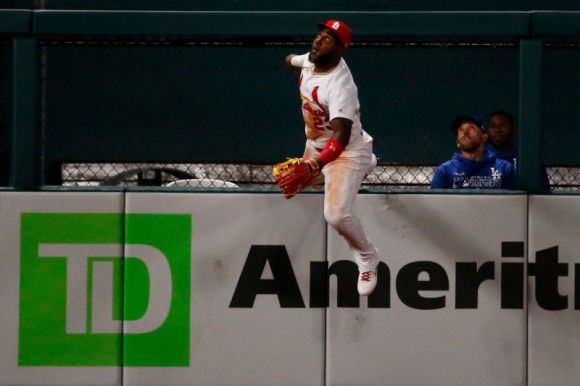 The old sporting adage goes that if you're not up to the task, the ball will find you.

Things get weird when those times happen and you can't even find the ball.

The St Louis Cardinals' Marcell Ozuna is the latest example of this, with an alleged fielding effort that's gonna grace blooper videos for years to come.

"See, what had happened was..." - Marcell Ozuna, probably. pic.twitter.com/1pHXLaeDOq

The directors of Major League or Naked Gun wouldn't have tried to sneak something like that into their films for fear of going too Bizzarro World.

The only reason Ozuna going down the fence while the ball was bouncing over it doesn't edge José Caseco from the top spot in outrageous outfielding was that Mr PED gave the ball as much of a boost as controlled substances gave to him.

It wasn't always that way for Ozuna, though.

Back in the day when Marlins were orange, dude knew how to climb a fence because a ball was up in the air to be had:

Maybe it's a coincidence, or maybe it isn't, but that's also when he had a hose.

Lax off-season rehab this past winter still has the Cardinals quietly fuming. Dude's arm strength is still -- shall we say? -- limber to the point of needing some sorta Viagra for limbs.

In the interest of equal time, check out this montage of Ozuna's prowess from 2014-2015:

That's what St Louis figured they'd be getting when they traded for him.

They're still waiting, and if his hitting doesn't pick up soon -- odds are skipper Mike Shildt will go Old School and give him 100 ABs before making a decision -- we may have just seen the centerpiece of his 2019 highlight video.