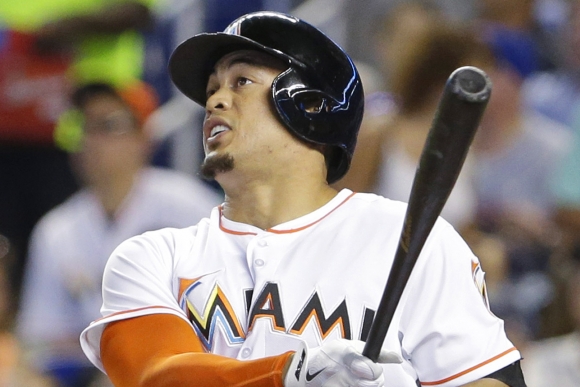 Not a run-of-the-mill bump in the ocean that global warming will soon swallow, which includes a few that self-govern.

And definitely not a man-made sea structure that sneaked through the back door to nationhood.

No, Giancarlo Stanton needs something legendary. Like the $325million, 13-year deal he's about to sign. Like the Miami Marlins clearly expect him to be. Something like the spot where Gilligan -- and the Skipper, too -- landed. Or wherever the hell it was that Lost hooked up with the Twilight Zone.

In fact, with that contract, maybe he could pay someone to tell the great unwashed whatever it was they were watching.

Stanton's gonna be able to make it rain. However he wants.

And not just baseballs. But he does his share of that.

This deal makes more sense than most long-term contracts because Stanton's only 25. He's just entering his prime, which is scary. Almost as scary as that fastball to the face he took last season.

And who in their most psychedelic moments ever foresaw Miami stepping up? Marlins owner Jeffrey Loria may be a villain, but he's not loco Moreno with the team's payroll. So the question becomes, can Loria actually be trusted to build -- and keep -- a competitive team around his centerpiece?

No matter. With his signature in dry ink, Stanton will have enough dosh to be the real global force for good. Hey, it's trending!

And even then, his coffers will still be overflowing to the point that when he's not going yard, he and the next umpteen generations of Stantons can do all that cool stuff the mega-rich do.