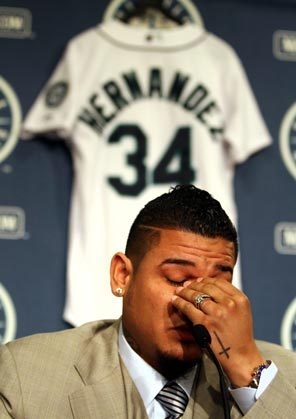 The only hits that kept on coming were to their PR department.

It was bad enough when manager Eric Wedge resigned in what was a bizarre, TMZ-style storyline of events. He seemed bitter that GM Jack Zduriencik received a contract extension but he didn't. No one outside the organization knew why, either, as the Mariners chose not to make that announcement until the season ended. So puzzlement ensued when Wedge said if the Mariners offered him a five-year contract, he wouldn’t sign it. He didn't just burn a bridge, he napalmed and nuked it at the same time!

Then, last week, news reports named the wife of Mariners ace Félix Hernandez’s in court documents, stating she was the victim of fraud. Turns out the wife of OF Carlos Peguero went hyper with an online shopping spree of her own at Sak's Fifth Avenue using Sandra Hernandez'a debit card. I guess if you’re going to steal money from somebody's better half, who better than the spouse of a dude with a seven-year, $175 million dollar contract? She couldn't have rung up $180,000 in bling if she was ripping off Brad Miller’s wife!

At least that would have only been petty larceny. As it is, she's looking at time in the big house.

Peguero’s wife was charged with three counts of wire fraud, ringing up 60 different transactions from the upscale retailer. That basically blasts the old 'it was a silly mistake' alibi out of the water.

According to the charging documents, Hernandez’s wife doesn't English very well, so Peguero’s wife helped her make a few purchases. Then she helped herself make a few purchases with the same card. It’s also stated that images on her Twitter account were the focus of the investigation. Just more evidence to be careful what you post online!

So, let’s recap the truly strange events that surrounded the Seattle Mariners this year:

Thank the sports gods for the Seahawks! Otherwise, sports fans in Seattle would be forced to watch 1995 post-season highlights over and over again.