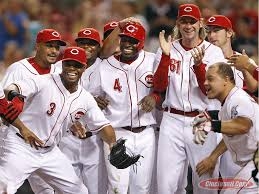 Looking at Bovada's line for today's Reds-Mets game, one would get the impression it's a pretty even contest with Cincinnati a slight favorite at -110, while Met bettors get even money.

But taking a look into some of the numbers, there are plenty of reasons to think this game has a Cincy victory written all over it, and the 10% juice on the Reds is actualy a great bargain.

First of all, the Reds go with righty Matt Leake (3-2; 3.72) and just the sound of the word righty alone has to make New York feel uncomfortable. The Mets are batting a lowly .229 this season against right-handed pitchers, leaving only the Marlins with a lower average against right-handers (yes, that even means the Astros hit righties better). Leake also may be finding his groove, coming off his best start of the season last Wednesday when he tossed 6⅔ innings of shutout ball. Leake also must relish a chance to pitch against the Mets because he has four starts against them with an ERA of 1.65.

Jonathon Niese will oppose Leake and he also is coming off his best start of the season. His problem is that's really not saying a whole lot. His 7⅓ innings where he allowed two runs last week against the Cardinals brought his ERA down to 5.40. If the 5.40 ERA doesn't impress, then his lifetime 5.61 against the Reds will probably not provide a whole lot more faith that the Mets are a very good play here. And don't think Niese can any feel better in his home ballpark of Citi Field. He has four starts against the Reds lifetime with a 1-2 mark, and both losses came at home.

The Reds' Jay Bruce enters tonight's contest with an 11-game hitting streak and has loved facing the Mets as of late. He's batting .370 over his last five games against New York with five home runs. Met hitters, on the other hand, arent enjoying nearly the same success. First baseman Ike Davis is batting .152 on the season, and the Mets as a team are averaging barely over two runs per game in their last 11 at home.

This one has way too many signs leaning the Reds' way, and while we don't get into any "5-star, 100-unit plays of the year" here, this one is going to be a strong play on my end (if you know what I mean). Cincy is a can't miss tonight, especially for the value.