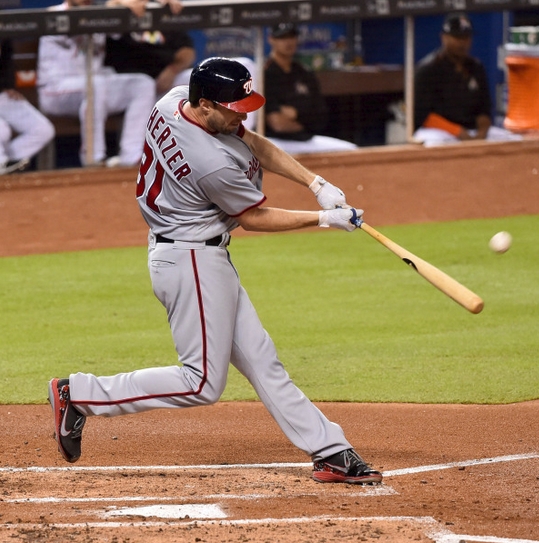 Life's been good in the city of Washington.

No, not necessarily in the world of politics.

Until recently, that assessment was referring to the capital city’s own Washington Nationals.

With less than two months left in the season, the club has a commanding lead in the NL East.

One of the biggest factors in their success this season is team ace and possible Cy Young candidate Max Scherzer.

Scherzer currently leads the league in strikeouts, WAR -- for all players, not just pitchers -- as well as WHIP.

Currently listed third in ESPN’s Cy Young predictor behind an injured Clayton Kershaw and closer Kenley Jansen, Scherzer is looking pass that pair and take home the honor for a third time.

Things couldn’t have been looking better for the ace with multi-colored eyes. Unless, of course, he could improve his worth with the bat.

That was in the second inning of a 1-0 game against Miami. Scherzer finally got one after 308 career at-bats with a swing that will make hitting coaches everywhere shake their heads.

However, things for both Scherzer and the Nats went south when he went out to pitch the bottom of the inning.

After bouncing his first warm-up pitch, Scherzer called manager Dusty Baker out of the dugout to report that he was done for the night.

Reports trickled out that he exited due to a neck spasm.

While not good news, Scherzer told the press the injury didn’t stem from his home run swing but from sleeping oddly.

This doesn’t appear to be major, but the Nats can’t afford to lose any more pitchers.

With fellow ace Stephen Strasburg already on the DL, Washington can’t risk having their two big guns dinged up going into the post-season.

Toss in Bryce Harper losing a battle with first base, and that rosy Nationals future looks to be in a bit of jeopardy.

They may need a healthy Scherzer on the mound and at the plate at this rate.