Samardzija Goes Home; A's Go Back to the Blueprint 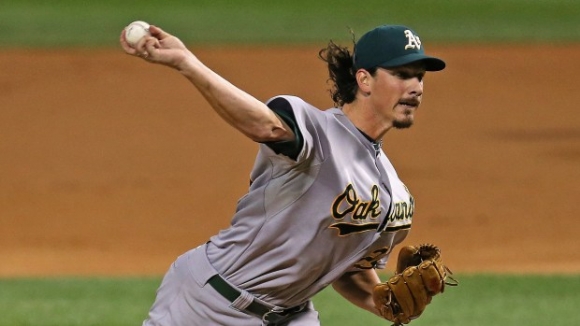 A lifelong White Sox fan finally gets to be a White Sock ...

Billy Beane's devolution of the Oakland Athletics has taken another step forward ...

Or is it backward?

He's got a plan, to be sure, but it's the ChiSox who are getting the headlines right now.

Their cash registers must already be sizzlin' hot with season ticket and merchandise sales in anticipation of a hard charge in the AL Central. But here's the cautionary qualifier:

This looks a whole lot like Toronto after they traded for half of the Marlins' payroll. Maybe that'll work out this season, two years later. Jeff Loria's a villain with an uncanny knack for landing on his feet. Miami could be quality enough for him to have the option of dismantling it again in the very near future.

Meanwhile, Mr Moneyball and his geeks are doing baseball's version of Black Friday. The centerpiece in the Sox deal was shortstop Marcus Semien, who will have to raise his all-around game to fill Addison Russell's potential that was sent to the Cubs for Samardzija.

And for all of his number-crunching logic, word is Beane ran Josh Donaldson outa town because of a personal dispute, although the A's GM denied it. The Blue Jays mock-shockingly gave up a Canadian to get the former Oakland centerpiece, hoping that messing with a little maple leaf isn't bad karma. Maybe Beane did hit it with this one. He thinks so:

It's been a whirlwind day at the winter meetings, then:

Not sure about anywhere else on the day, but the Windy City's counting its blessings.