Sabathia Gets Ejected Two Innings Short of a $500,000 Bonus 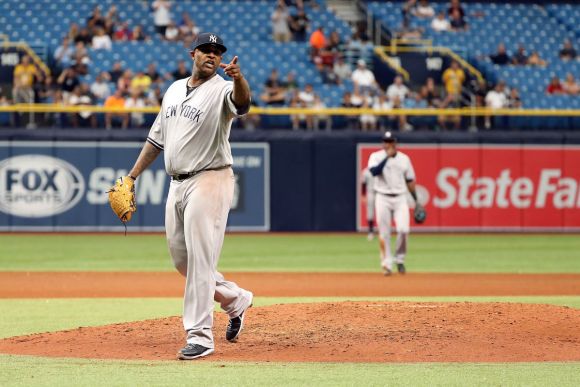 In the grand scheme of things, this was both chump change and money dude never had.

CC Sabathia's earned enough over the course of his career to keep himself and several generations of his descendants in clover in perpetuity, even if they've got a halfway competent financial manager.

So, the heat of competition totally overshadowed the burly southpaw's mindset.

The thought that making it to the seventh to cash a contract clause for logging 155 innings was probably only brought to his attention by a media dude after the game.

But, still. Sabathia wasn't fazed. It's clear he has priorities.

The New York Yankees were in the process of blowing Tampa Bay out to the tune of an 11-0 whitewash that, by definition, showed Sabathia was cruising.

It'd been a testy series. Pertinent to the point are these:

It's one thing to send a message, but throwing behind a batter's head -- where he'll naturally duck to get outta the way -- is uncool.

Damn near anyone who follows baseball knew what was gonna happen next.

Sabathia doesn't really have a fastball anymore, but a 92mph cutter can leave a mark, too:

The home plate umpire issued warnings to each bench after the Kittridge fly-by, so according to the rules, Sabathia had to go.

Not to the bank. To the shower.