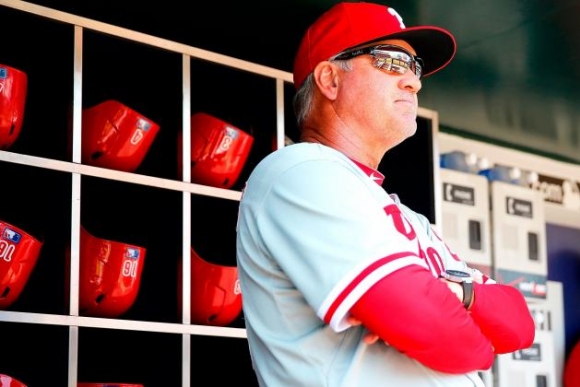 Currently the worst team in baseball, the Phils are well capable of losing under any skipper's watch, and Sandberg clearly saw that wasn't changing anytime soon.

With an unimpressive one ful- and two half-seasons at the helm, the Hall of Famer compliled a 119-159 record in his first major-league stint. He was given the position in 2013 after the Phillies fired  Charlie Manuel.

Sandberg's been around the game long enough that he knew what was coming. So, he opted to step down before getting canned and allow whatever future changes were on the way to come naturally.

With the recent firings of Mike Redmond in Miami and Bud Black in San Diego -- neither of which made much sense -- the imminent possibility of suffering the same fate certainly must have been in the back of Sandberg's mind. And despite doing some light stomping on the Yankees, he decided to call it.

The Phils' decline started well before Sandberg came into the picture. They refused to make the hard calls in the wake of their World Series days, which got them to where they are now. The downward trend is stark:

2008 ... Phillies beat the Rays in Game 5 of the World Series to take the championship.

2009 ... Phillies lose the World Series to the Yankees

Some would say GM Rubén Amaro Jr has the anti-Midas touch.

Clearly, it's past time for the Phils to take a firm grasp of the obvious.

Just as clearly, Sandberg saw it coming and didn't feel like floating on the waves until they hit the shore.