Runnin' It Up, North of the Border 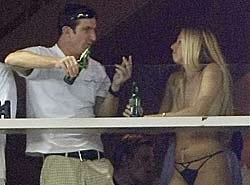 The Yankees and Blue Jays open a three-game set today at Rogers Centre in Toronto and expect these two to open with a bang as far as runs are concerned.

Neither team puts a starting pitcher on the hill who will raise any eyebrows ... that is, except those like me who are jumping on Bovada's total of 8½.

Over Hughes' last 10 starts, opponents are averaging 4.8 runs per game, while the number is 4.1 for Dickey. Each team's bullpen has been pretty decent this season, but I just don't think the starters will keep this game in position to stay under the number, come the later innings.

Then there's the point that Yankees second baseman Robinson Cano is batting a sizzling .464 over his last 14 games, and he's also a smoldering 10-20 with three homers and nine runs batted in against Toronto over his last five games. Want more? How about a .515 batting average during an eight-game hitting streak in Toronto.

The Yankees may need all the help they can get as Hughes' ERA over his last eight starts is a lofty 5.63. Helping his cause -- and mine as an over player -- is Derek Jeter returning to the lineup tonight for New York. His counterpart, José Reyes of Toronto, has fared well against the Yankees as of late. Reyes is hitting .393 against New York this season and already has two homers in just six at bats versus the Bronx Bombers this season.

There's also support for the over by using the Bovada data tool on our Home page, where you will see the over has cashed in four of the last six played between these two in Canada.

Some days, finding a winning team at a good price is a tough chore, and today was one of those days for me. But I found this little number that is very appealing, and I have put my money where my mouth is. Now if you will allow me, I need to get to my favorite Vegas sportsbook, make my play, and watch the runs come home.

If you're not in Vegas, I suggest you just open an account at Bovada. Just click their ad on this page!