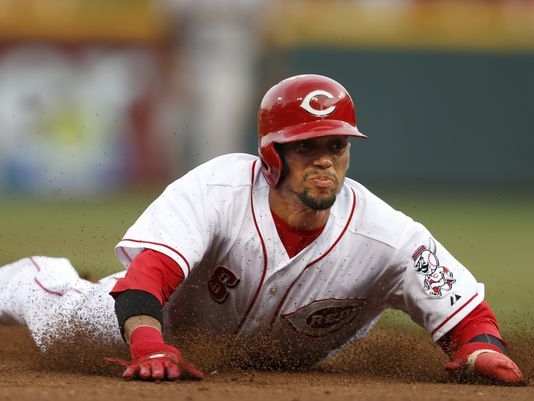 Billy Hamilton is quite possibly the fastest man in sports.

That’s why displays such as the one he put on Sunday night against the Cubs should come as no surprise.

Hamilton, who leads the league with 31 stolen bases, stole a career-high five bases in a single game. Better still, he now has 100 career stolen bases in a mere 219 games.

The Cincinnati speedster’s night is much more impressive than it may seem. The last player to steal five or more bases in a single game was Jacoby Ellsbury, who swiped five on 30 May 2013.

In the time between Ellsbury’s and Hamilton’s feats, there have been a total of nine no-hitters. That means, on any given night, you're more likely to see a no-hitter than a player stealing five bases.

Hamilton’s ability on the base path has drawn comparisons to another speed merchant, Deion Sanders. Last year, MLB Tonight did a side-by-side comparison, which showed Hamilton was slightly faster than Sanders.

There was another player named Billy Hamilton who played back in the 1800s. Sliding Billy, as he was called, stole 914 career bases and is tied for the record with seven stolen bases in a single game.

The modern-day Billy Hamilton has a long way to go before he can be considered the Sultan of the Stolen Base. In order to challenge guys like Ricky Henderson and Lou Brock, Billy will have to improve his on-base percentage, which is currently -- and incredibly -- below the MLB average.

If the dude can find a way to get on more often, he may become the most feared base runner, of this generation.

In the meantime, be wary MLB teams. For if Hamilton can find a way to safely cover the first 90 feet, don’t blink.

Because if you do, he might already have scored.