Rumor Has It Albert Pujols Just Jacked HR No 600

Published on 4-Jun-2017 by Alan Adamsson 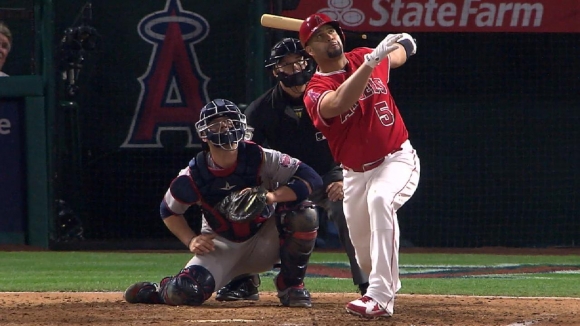 It's been said -- quite accurately that more men have walked on the moon than have hit 600 home runs.

By the last lunar misson, incredibly, it was buried behind who-knows-what in the news cycle.

The only real build-up to this monumental achievement seemed to be confined to the Angels and their closest friends.

Even the fact that it was a grand slam seemed to be part of a bigger story that only trivia buffs would appreciate.

But, being real, this is what Pujols' career in Anaheim has been all about.

He's got a first-ballot Hall of Famer in Pujols, and fans come to see wunderkind Mike Trout. When he's healthy.

Trout deservedly gets accolades for being a legit five-tool dude, but in the long-ball category, it's Pujols who's gone deep more often, 271 to 179.

Would it have been this way if he'd stayed with the St Louis Cardinals?

No one knew he'd already hit his peak, and there was nowhere to go but down.

But in dingers, at least, the dude abides. He's signed through 2021, when he'll be 41. If his feet hold steady, it's conceivable he could reach the 700 level.

One can only hope. Pujols gave his all for the game, and he deserved more of a spotlight than what he got for hitting his 600th.