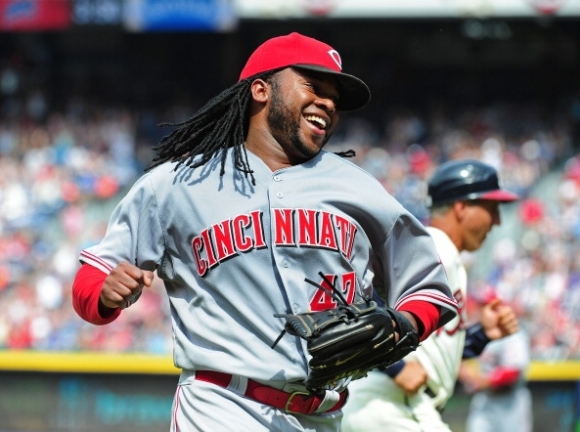 Once again, more MLB teams fancy themselves contenders around the trade deadline than before.

Teams on the fringe of contention see their unrealistic post-season hopes the same way Lloyd Christmas views his prospects with Mary Swanson.

While it makes for entertaining cinema, it also makes for a boring trade deadline. Since teams like the Tigers and Mets think they could sneak into October if everything breaks right, they're far more hesitant to deal players that could bring them the kind of return that replenishes farm systems and turns patient teams in 2015 into championship squads in 2018.

Thankfully, the clear buyers and sellers aren't deterred when it comes to making moves.

In that vein, it's refreshing to see a team like the Royals, perhaps the most surprising contender of all, make a trade with the floundering Reds for their ace/upcoming free agent Johnny Cueto.

Reds GM Walt Jocketty did well here. The talent he's receiving is reminiscent the deadline deal in 1987 when Atlanta's took an unproven John Smoltz in 1987 from Detroit, who was desperate for seasoned pitching help and got it in Doyle Alexander.

Kansas City may live to regret shipping out Finnegan, and scouts love Reed as a future power pitcher. They'd be far more maligned if they hadn't made a move like this, though, but Cueto gives the team a far more reliable ace than Big Game James Shields. He ended up being anything but, unless you consider a 6.12 ERA in 25 playoff innings acceptable.

The Royals did it without losing any major pieces that helped them get to last year's Fall Classic. That's vital, because their time is now. No telling how long they'll be able to afford those dudes when contracts start coming due.

Cueto's dealt with enough injuries in his career to make Eugene from Hey Arnold! blush, but he threw a career high 243⅔ innings last year and could feasibly top the 200 IP mark again this season. His playoff résumé isn't Bumgarner-like, but he's been good enough in limited action (a 1.69 ERA in 2 NLDS) to hope for something better than what Shields did.

And he'll certainly not miss the fans in St Louis or Pittsburgh:

That broadcaster should get to more hockey games. Ron Hextall, Mike Richter, et al would let him know all about those chants.

The Royals made it all the way to the last inning of Game 7 with a shot to win it all. Imagine how much more formidable they would have been with a pitcher who actually has considerable experience against their National League opponents.

While other franchises are tip-toeing around each other -- throwing out trade proposal jabs that don't land -- Kansas City just pulled off one knockout of a swap. Whether or not it'll lead to a stunner in the playoffs remains to be seen, but the American League favorite just became even more favorable.