Royal Re-Gifting: KC Scores Run on Error, Gives It Back on Bigger Error 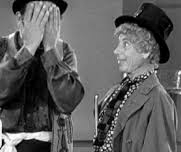 Baseball's first ever non-official instant replay made its debut in Kansas City yesterday.

If the Royals miss the division crown or the entire playoff field by one game, it'll be a reason they'll have nightmares all winter.

Kansas City squandered a solid start from Big Game James Shields, losing 3-2 to the Detroit Tigers due to a few dubious strategic decisions and one strange play that happened in the pivotal sixth inning. It started with deep-bench reserve Hernán Pérez telling Tiger manager Brad Ausmus he noticed something during this play:

Turned out to be a precious run. Had it counted, the Royals and Tigers could still be playing. Kansas City could well have won and clawed back to within a half-game of the AL Central lead.

The bizarre proceedings, though, should have been an afterthought. Someone should tell Royals manager Ned Yost that the sabremetric geeks have debunked bunting as a percentage play. Twice, he told his hottest hitter -- Norachika Aoki -- to give up his AB and lay one down. Scherzer gave him nothing to put down, so two outs were wasted.

Unless Detroit collapses in the next 10 days, Kansas City is left to duke it out with Oakland and Seattle for the American League's two wild-card spots. If the Royals are the odd team out, they only have their inattention to detail to blame.

That, and a premature viewing of an instant replay that shouldn't have been.