Published on 2-Oct-2018 by Alan Adamsson 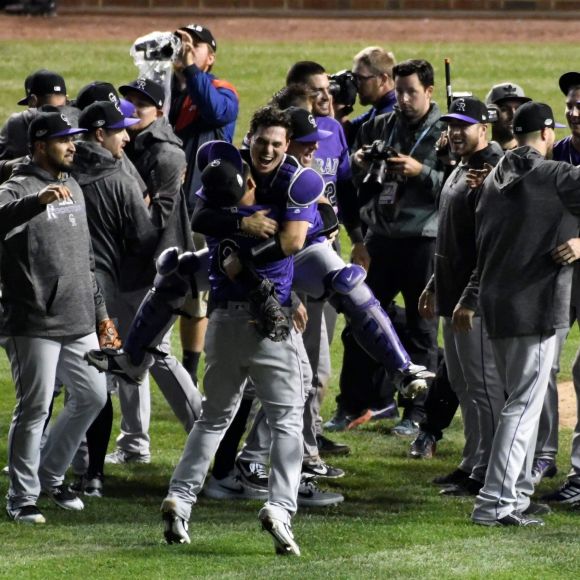 That was the last time dude got any sorta hit.

What in the name of the Change-Up Fairy were the Chicago Cubs thinking?

After the Rox managed a pair of two-out singles in the 13th inning, the Fuzzies incredibly chose to keep Wolters on the slow train for three consecutive pitches.

OK, the stat sheet showed him going 1-17 on changes, but they sure as hell didn't all come in the same at-bat.

Dude's not dumb. He'd just gotten a good look at the first two. So when Kyle Hendricks dutifully completed the trifecta, Wolters ... well ... picture it as a human metaphor:

Thus, a career .170 hitter with less than 200 ABs in The Show has become a legend along the Front Range.

Wolter's two-run single propelled Colorado to a 3-1 victory in the longest Wild Card game to date:

There'll be the usual pressure, of course, but it'll still beat the edginess of playing two straight one-&-done games.

The Cubs are probably still wondering what happened.

Dudes were 4½ games up on the Brews to start September, but even though they got through it with a 16-12 record, it wasn't enough to hold off Milwaukee's charge.

Now, in the span of two shocking days, Chicago went from having the NL's co-best record to watching the playoffs in the comfort of their homes or favorite sports bars.

Cold bats and a faltering bullpen will do that to a club. In both playoff losses, Chicago only scored one run in each and lost in the late innings when Joe Maddon went with starters outta desperation.

Actually, the Rox haven't exactly lit up the scoreboard the past two games, either. With Harvey's Wallbangers 2.0 in their immediate future, now would be an advisable time to start.

Here's one other suggestion for the rest of the playoffs: No more hugging.