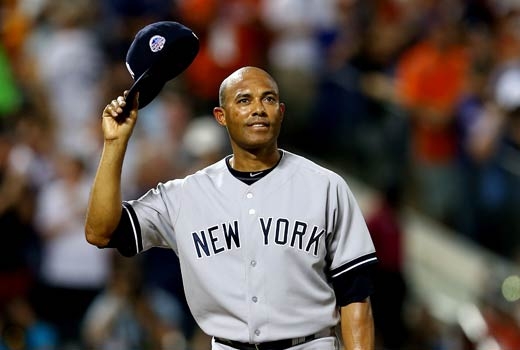 Whether you're a diehard Yankee fan or at the opposite of the spectrum -- ie- a fanatic Red Sox backer -- you have to appreciate how special Mariano Rivera’s appearance in the All-Star Game truly was.

Rivera announced earlier this year that 2013 will be his last season. The iconic reliever spent 19 years with the Yankees and will long be remembered as the best closer -- hell one of the best pitchers -- in the game. While 2013 has had its pleasant moments and stops on the 'Goodbye Mo' tour, the 2013 All-Star Game tops them all.

In the eighth inning, AL Manager Jim Leyland called for Mariano Rivera to hold a slim 3-0 lead. When Rivera trotted out to the mound, the stadium lit up as 40,000+ fans rose to their feet cheering on the beloved -- and hated -- closer as he made his final All-Star appearance.

Once he got to the mound, Mo turned and tipped his cap as the emotions rose, thanking the fans for everything over his illusrious career. Once the moment passed, he got down to business, throwing a shutout inning while striking out two. When asked later how he felt, Rivera was at a loss for words, but he managed to express his gratitude to everyone who made that moment, and his career, possible.

“I wanted to come to the game, and since this will be my last one, I wanted to enjoy and be able to pitch for the last time in the All-Star Game,” Rivera said. “The rest was indescribable.”

Even Dustin Pedroia, the sparky second baseman from the Sox was at a loss for words as he watched one of the greatest pitchers work his craft for the last time on such a stage.

“I was standing right there watching,” Pedroia said. “It was pretty cool. I had goosebumps the whole time. I’m sure a lot of people did.”

Many opposing fans learned to respect but hate the sight of Mariano Rivera on the mound. But just this once, everyone was cheering him on.

Just this once, though.