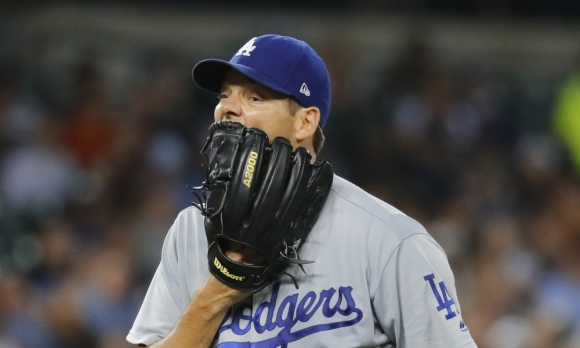 There are bad beats in all sports, including baseball.

Perhaps Rich Hill would like to discuss this in more detail.

The Los Angeles Dodgers lefty was on the receiving end of some really nasty karma in Pittsburgh, losing a perfect game and no-hitter in excruciating fashion.

Hill entered the eighth inning still perfect when this happened:

Yeah, that's some solid glove work by the OG at second.

Seemingly, every perfect game or no-hitter features at least one ridiculous play in the field -- and that was the second -- so things appeared to be looking good for Hill.

There was only one problem.

The game was still tied at zero.

This takes us to the ninth inning, when the inevitable occurred.

That was someone named Logan Forsythe booting the grounder, although in his defense, that wasn't the easiest play, and he appeared to get caught between wanting to go backhand and getting in front of the ball.

Nevertheless, Hill escaped the ninth inning with the no-no still intact, but since the Dodgers refused to score, the game continued into extra innings.

It ended rather abruptly in the bottom of the tenth, courtesy of the Pirates Josh Harrison.

And the aforementioned loss.

This evens the ledger for Pittsburgh, if nothing else.

Former Bucco lefty Harvey Haddix still has Hill beat -- or is that out-lost? -- with his 12 innings of perfect pitching spoiled in the 13th:

In this day and age, the headline would've been Eddie Matthews bunts!

That was in 1959, so there was no complete game footage. Today, Hill has the ironic luxury of viewing every out over and over.

Give Curtis Granderson credit for risking his ribs in pursuit of a miracle catch.

And give Hill more style points than he'll ever need. For what they're worth.