Rhys Hoskins Is One Record-Setting Phillie 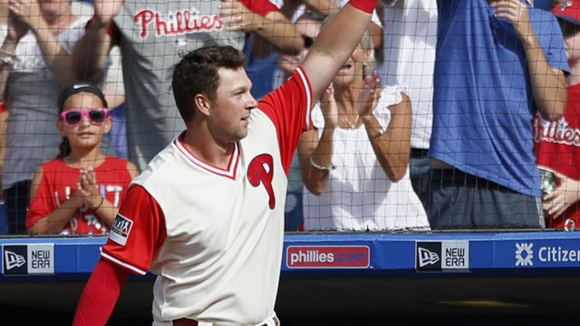 Citizens Bank Park is a bandbox.

As of this date, it's leading MLB yards in home runs hosted.

This isn't unusual. It's been at or near the top of that stat ever since it was built. It could have an even more dominant position if a bona fide bopper would ever show up for the slappin' Phillies.

Maybe now, he has. Meet Rhys Hopkins, possessor of 11 home runs in his first 18 MLB games:

The three locations pitchers want to exploit on bombers -- especially rooks -- are low-&-away, under the hands, and high-&-away, virtually in that order.

A cursory look at Hoskins' first eleven shows he's been ready for them. Toss in the occasional gopher ball, and he's suddenly sharing dinger headlines with the Colossus himself, who just crushed his 50th of the season:

Stanton will no doubt reap more headlines in September.

Hoskins? Who knows? Suffice to say he's carving his niche in those red-headed stepchild records that seamheads hold so dear.

So for now, dude's filling Phillies' fans heads with dreams of a brighter near-term future.

He was drafted in 2014's fifth round outta Sacramento State and hit every level of Philadelphia's farm system en route to his call-up to the big club on Thu 10 Aug. Hoskins was slashing .284/.385/.581 to accompany 29 bombs and 91 ribs when he said sayonara to Lehigh Valley.

The question now is, what does Hoskins' rise do to Tommy Joseph?

Hoskins' natural position is 1B. He's been stationed in LF since arriving with the big club.

How hot is Hoskins right now?

Dude even did his bit to help the Phils turn a triple play:

The next obvious task is for Hoskins to settle in at a consistent level once his torrid power pace dials back.

At the very least, it'll be a reason to notice the Phillies the rest of the way.