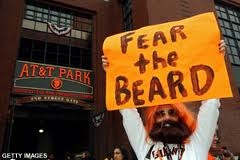 Let’s face it. The Giants have been stinking up the whole National League.

So much so that opposing teams have been issuing clothespins to their players before any contests with the defending two-out-of-three-ers.

But all members of the San Francisco franchise must turn up their collective noses at such tomfoolery and stoically wear Cheshire Cat grins. A winning grin begets more wins. That will help. But, of course, much more is required before the Orange & Black can once again assume their rightful place atop the NL West Standings.

The best thing for the Giants now is for the entire roster to come together, as the Beatles opined, with one united stance around a single precept. Much as they did during last season’s championship run.

All Giants players, coaches, and manager must grow Brian Wilson-esque beards. The thing is obvious, clear, and unmistakable. But it must be the entire roster this time around that sports them. It would be best if Brian Sabean grew one also, but his and those of other front office suits are optional. The more involvement of the total organization in this important restructuring, the better.

Those who followed the recent presidential election should recall -- assuming their total recall -- that once Obama's trusty speech-penner, Jon Favreau, security assistant Ben Rhodes, and other re-election staff members grew beards, in addition to their wise insistence on shooting hoops that fateful day, the election was a fait accompli.

Therefore, it is bound to work wonders for the Giants. Think of the power and the possibilities! Image the terror it will strike in the hearts of opponents when they fear the nasty nine beards of the players and the rest of the roster as they stare them down with their fuzzy gazes. It will be glorious.

So, no slackers or exceptions for this new winning strategy, no matter what a player’s star status may be. All Giants must now grow a beard for the good of the team. Or be traded. It’s that important.

Sabean should also explore getting Brian Wilson. After all, the Beach Boys aren't touring anymore, and I hear that he's off coke now.