Published on 25-Aug-2013 by Xavier McSpaniel 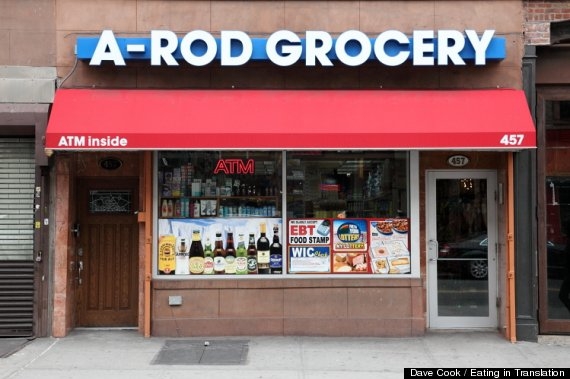 The A-Rod Grocery store in Brooklyn -- yes, it's a thing -- is changing its name after thirteen years of blissful, drug-free commerce.

Owner Ricardo Rodriguez, tagged 'Nay-Rod' in some quarters, has had a gutful of his beloved neighbourhood shop taking heat for the "banned" Major League miscreant and is seeking a new moniker.

“About a month ago, people started complaining,” said Rodriguez, pointing to the picket line in the juice aisle. “We never thought it would be an issue, but it’s about making sure the people are happy, and that’s why we decided to change the name.”

It was a different story back in 2000 when Peña Grocery decided to honor a skinny, unsoiled Seattle Mariners star. Locals applauded. Dominicans in the community celebrated. José Canseco invented Twitter so he could communicate his delight to the rest of the world.

“(Then) when he moved to New York, a lot of people got excited,” Rodriguez added. “They thought he owned the place.”

That mistake won't happen again once the new sign goes up.

But what will be on it? The Daily Player has a few suggestions:

2-Eleven: Popular with customers but could suggest going out of business soon.

Buy-O-Genesis: A chance for the shop to move into the lucrative supplements market. They're always in demand.

The Sorry Market: The customer service desk could feature Ryan Braun telling you how it was sort of your fault for buying the product in the first place.