Red Sox Pick Off a Win in Game Four 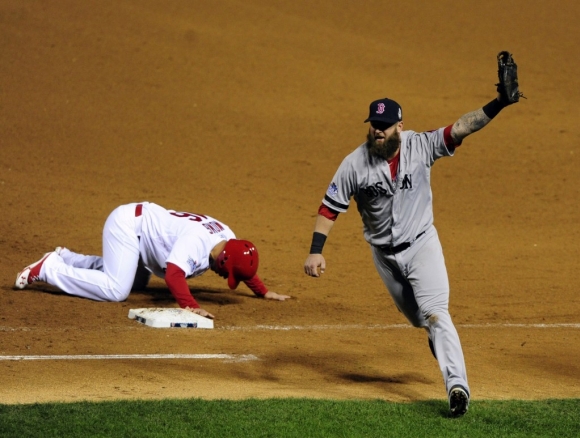 George Will said it well in his tome, Men at Work: The Craft of Baseball:

Baseball is as much a mental contest as a physical one. The pace of action is relentless: There is barely enough time between pitches for all the thinking that is required, and that the best players do, in processing the changing information about the crucial variables.

Until a crucial moment in Game Four of this year's World Series, it's been easy to chide the Boston Red Sox for their lack of mental preparation. In what these days is a rare pairing of teams who compiled the best records in their respective leagues over the course of a season, tending to every detail in this Fall Classic counts big.

And last night, in the bottom of the ninth, clinging to a 4-2 lead with the dangerous Carlos Beltrán awaiting a 1-1 pitch, the Red Sox took advantage of a colossal Cardinal mental lapse. The victim was rookie pinch-runner Kolten Wong, and the result was sealing a victory that tied the Series at two games apiece:

How did St Louis not become suspicious of this possibility? The signs were blatantly there:

Why would Napoli be under orders to do that?

In doing so, he was leaving an even larger hole on the right side of the infield for Beltrán, who would have no problem pulling a high-80s/low-90s Uehara pitch through it, thus putting the winning run on first base -- at the very least -- with Matt Holliday coming up. And in this game, Holliday was due.

On the surface of it, Napoli's positioning didn't make any sense.

Compare what was happening here to countless scenes in the original Star Trek. This is the same sort of situation every alleged 'security' dude in the red shirt standing next to Captain Kirk on a foreign planet never took the time to notice, although that was his job. Hence, he was always the off-guard rube who got zapped. Those who don't learn from history or cultural reference points are doomed to repeat it.

Did the Cardinals merely think the Red Sox were being brain-dead again? Or this time, were they the ones who weren't thinking?

Wong may be the fleetest of Redbirds, but manager Mike Matheny was never going to risk his getting thrown out on a steal attempt, not as the potential 'bridge' run and with Beltrán ready to savor another heroic moment at the plate. So, what was Wong doing by taking any sort of lead that might draw a throw over to first? Why wasn't first-base coach Chris Maloney telling the rookie to stay close?

Boston surely saw something the night before when Wong did steal a base on them. His long leads can be carelessly taken; that is, he's a 'hopper.'

Wong's got a bad habit of having both feet in the air at the end of his lead. He did it in Game Three, and he did it before the two pitches to Beltrán in this game. Alert pitchers can time that and take measures.

Uehara did. Game over.

The Series will now be extended to at least six games, which means a return to Boston and the inclusion of both David Ortiz and Mike Napoli in the Red Sox lineup at the same time.

Who knows if Beltrán would have added to his super-human October reputation if he'd had a chance? Boston's plan was to ensure they didn't find out. The plan worked. Most notably, it was a plan.

To his credit, Wong stood up to be counted in the aftermath. He faced reporters with his assessment of what just happened:

The obvious flaw remains: Why did he even put himself in that position? More severely, why did the Cardinal coaches allow him to do it? Especially with the aforementioned clues that something might be up?

Wong needs to correct his leadoff technique immediately, or this will happen again. The proper method of taking leads is a step at a time, with one foot on the ground at all times. Kids are taught this the moment they grow into leagues that allow leads.

So far, the 2013 World Series will be remembered for its dramatic conclusions to games. But it should also be remembered for underscoring the importance of the game's mental aspects. And it would be advisable for both the Cardinal and Red Sox players to start remembering it right now.