Red Sox Finally Back in the Playoffs 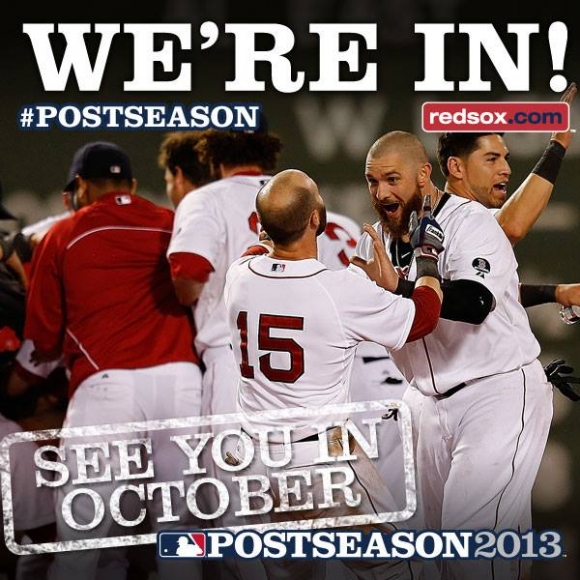 It is official. The team its own city loves to hate has officially made the playoffs.

Yep, despite the odds against them, the Boston Red Sox have clinched a playoff berth.

Granted it's the Wild Card spot and the real celebration won’t happen until they clinch the division, but at the very least, the BoSox are officially playoff bound.

It’s been a while since the Sox last appeared in the post season. They last made an October run in 2009 and were promptly swept by the Los Angeles Angels of Anaheim in the ALDS in humiliating fashion. Clay Buchholz took the mound for the Sox in Game 3; the stringy right-hander tossed five innings that game while letting up just two runs; he left with a secure 5-2 lead. The Angels roared back to life in a ninth-inning rally as Jonathan Papelbon gave us one of his infamous blown saves.

This post-season drought was not so torturous as the ones before 2004, yet it still stung. Sox fans were given players like Brad Penny and Mike Cameron, as if they could really lead the Sox to the World Series. After the 2011 collapse in September, a greasy, alcohol-soaked affair, Sox fans had given up.

Somehow Ben Cherington and John Farrell put together the best team in the MLB, and after a long stretch of Octobers spent watching baseball, Sox fans can finally rejoice, because the Sox are here to stay. In a way, it’s fitting that John Lackey was on the mound to clinch a playoff berth. After all those years of regretting we signed him, he was the one to do the honors.