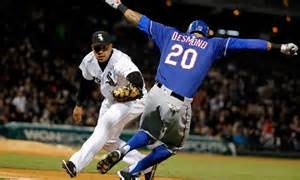 Here's the chance of botching a bases-loaded, no-out rally:

So, if you're gonna do it, you may as well make history.

The Texas Rangers did just that, tossing in a brain-dead second out to usher in the first known triple play in MLB's annals that featured a fly out, an overrun base, and a traffic-jam rundown:

What in the name of Manny Ramírez was Ian Desmond thinking at first base?

No wonder a Cleveland fan brought this sign to a game:

Triple plays are supposed to be feats of incredible defensive reflexes capitalizing on a sudden situation.

And here's a variation on the theme of baserunners moving on the pitch:

Yes, unassisted triple plays are one of the rarest plays in baseball.

But as of this moment, there's only been one triggered by bad baserunning of exceptionally breathtaking proportions.

The White Sox were virtually innocent bystanders of history. But they'll take it.