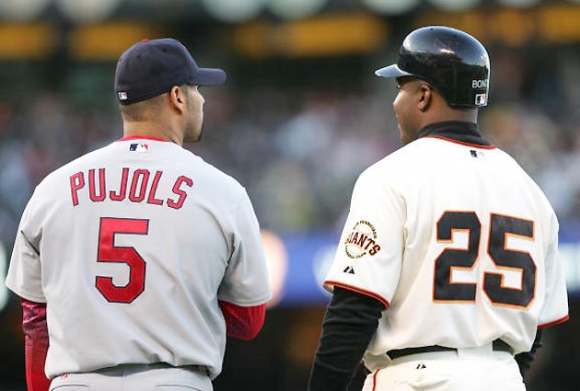 When a dude worth over a quarter of a billion dollars says he'll sue, you'd better be absolutely sure you have your facts straight or you'd better cut your losses quickly.

If you're anywhere near being related to a dude getting sued, know that you risk getting hit financially if the dude loses his case.

And with those two facts of life in mind, Jack Clark is out of work as a sportsradio host.

Albert Pujols didn't take too kindly to Clark's recent hints and allegations. And when he doesn't have to swing a bat these days, he's still a man of action:

“I know people are tired of athletes saying they are innocent, asking for the public to believe in them, only to have their sins exposed later down the road. But I am not one of those athletes, and I will not stand to have my name and my family’s name, dragged through the mud.

“I am currently in the process of taking legal action against Jack Clark and his employers at WGNU 920AM. I am going to send a message that you cannot act in a reckless manner, like they have, and get away with it. If I have to be the athlete to carry the torch and pave the way for other innocent players to see that you can do something about it, I am proud to be that person. I have five young children and I take being a role model very seriously. The last thing I want is for the fans, and especially the kids out there, to question my reputation and character.”

Ever since the shock-jock schtick oozed over into sportscasting, it's been common to hear outrageous statements made for the mere objective of grabbing some prime time in the 24-hour news cycle. Facts have almost become secondary, especially when the spouter is coy enough about how they're presented.

Unfortunately for Clark, he's not any more coy now than when he was a player. Ask Tom Niedenfuer.

The good sports journalists know to use a scalpel rather than a bludgeon when delving into areas of impugnity. That's why it's a welcome sight to see one of the best return to his roots, even if those roots have now sprouted a legion of substance-light shouters themselves.

Here's how Keith Olbermann weaves a report around allegations of wrongdoing:

And so the scorecard for the week reads like this:

Meanwhile, it seems Pujols has made his point.